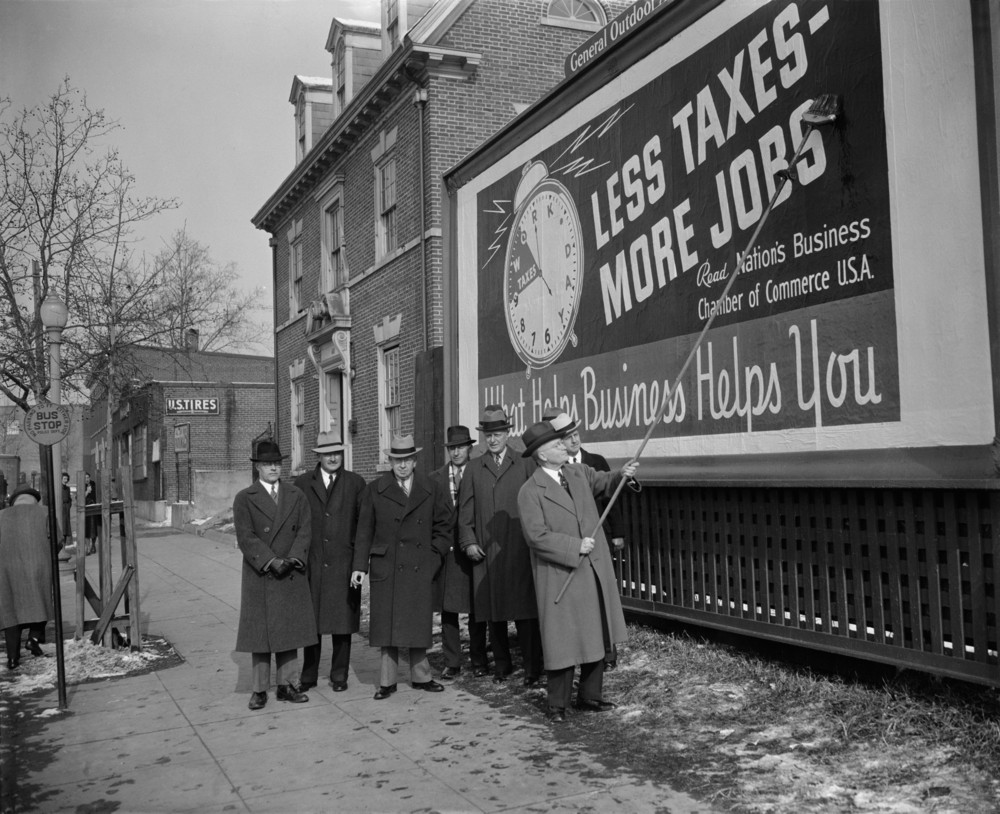 It seems illogical to increase your advertising budget when everyone else is cutting back or sales are softening, but during all past economic downturns, the clever companies that increased spending ended up better off after the crisis.

Times are tough and advertising budgets are being slashed

The chart below illustrates that companies are severely curtailing their spending. It’s been brutal for advertising outlets and media, and for the creative industry overall. It’s a natural reaction for companies to pull back on marketing and
advertising during down times. Nonetheless, it’s short-sighted and often motivated by a defensive mindset that may help the bottom line in the short term, but weakens it in the long run.

A quick google search online will uncover many articles and blogs dedicated to this topic. It’s no wonder, since times are difficult all over. And all the articles agree that companies that enter a recession or depression with a reasonably healthy balance sheet, and who increase marketing instead of recoiling, fare far better during and after the economic slow down. In fact, often these companies become industry giants because of it.

The concept is relatively easy to grasp; even when times are tight, people don’t completely stop spending. They simply look for better bargains. When companies slow or stop their ad spending, they vanish from the consumer’s mind too. And even if they don’t disappear completely, subconsciously, consumers begin to entertain doubts about them; they perceive the brands as weak or fading, and will often gravitate to the competitor who is maintaining or increasing their ad spending. It’s simple really - if two people are talking to you, and one stops and leaves the room….you’re only going to listen to and be influenced by the one who stays and continues talking.

Proctor and Gamble is the quintessential prototype. Founded in late 1837, it has successfully navigated many economic turmoils throughout its history. During the Great Depression, Proctor and Gamble won even more business and consumer mindshare by increasing their advertising when competitors cut back. They embraced new advertising outlets such as radio, and pioneered novel marketing concepts, essentially creating the entertainment genre of soap operas. This philosophy continues today: P&G does not reduce advertising budgets during tough times. If anything, they increase them.

Chevrolet ousted Ford as the automotive industry leader. Even though Ford outsold Chevy 10 to 1, by 1931, due to increased advertising (and Ford’s lack of it), Chevrolet became the dominant car maker. Though I’m sure if you consider today’s landscape, they’re not a great example… but that’s another story.

Camel Cigarettes was the market leader in tobacco, but faced increased competition from Lucky Strike and Chesterfield cigarettes. Camel countered with more advertising, and it’s aggressive response paid off, as they regained the top position in 1935. Advertising turned the tide.

But success stories aren’t limited to the depression - many of today’s most successful companies were founded and thrived during deep recessions because they were smart fiscally and marketed wisely.

FedEx Corp started business in 1973 during the gas crisis-led recession. In spite of relying on gas-guzzling trucks and planes to ship packages around the country, it succeeded and grew. Not only because it could deliver overnight, but because it communicated that it could do so, and convinced businesses that it was the better option.

Microsoft Corp was similarly founded in 1975 during the continuing economic turmoil. The combination of Bill Gates’ business savvy, and continued investment in marketing, helped it to survive and thrive ñ even ousting its earliest benefactor, IBM, as Microsoft overtook the personal computer and business computing market. No one can deny that Microsoft spends heavily on marketing in good times and bad - even if sometimes it misses the mark.

CNN began its life during the tight times of 1980. And by capitalizing on the quickly-spreading cable industry, it transformed into the preeminent 24-hour news channel. It did this through quality reporting and through strong branding and marketing. Perhaps they’re not top banana anymore, but they still defined the all-news, all-day concept.

And even during recent and current economic collapses, which have seen the ruination of 100 year old companies - smart companies have increased revenue. Often with a combination of foresight, cunning, luck, and a healthy dose of marketing when others are not ñ these companies soar to the top.

Method started in 2000 during the dot-com bust. The founders used guerilla marketing and pure entrepreneurship to keep things going through the early days - making the products and hawking them personally to store managers. But this helped them hone their pitch, and readied them for later success. And as stated by one of the founders on inc.com, “Starting a business in a recession is like vacationing in the off-season,” says Ryan. “It’s a little less crowded, and everything
starts going on sale.”(5)

Verizon invested in building out its fiber-optic network, and has been able to reap the rewards of doing so. It’s able to compete against cable companies and other phone companies to offer competitively-priced deals for phone, TV, and internet. And by “promoting the hell out of it in TV ads” they’ve attracted both the price-conscious and the high-end consumer. “As one analyst put it, ‘FiOS lets Verizon play offense in a defensive
market.’”(4)

The moral of the story

Provided you’ve managed your business well and planned for the eventual rocky future times like today ñ the time to act is now. Spend wisely, but spend more during these tough times and you can catapult ahead of your competition. Be sure to fight the urge to recoil and circle your financial wagons. Don’t cut your marketing budgets, and don’t stop advertising. You can’t sell something if no one knows it’s for sale.

Remain steadfast, but be cunning and think creatively - look for opportunities that offer you more bang for your marketing buck. As you keep investing in advertising when others are not, the chart above shows, desperate media outlets will offer you aggressive deals to get your ad dollars - so you’ll win even more as you can get more for less. Keep advertising and you’ll be the voice that your consumers hear and remember - so that when things turn around, you’ll be the leader of the pack.

« Recourses, Inc Is A Valuable Resource