Is your business ready for liquid branding? 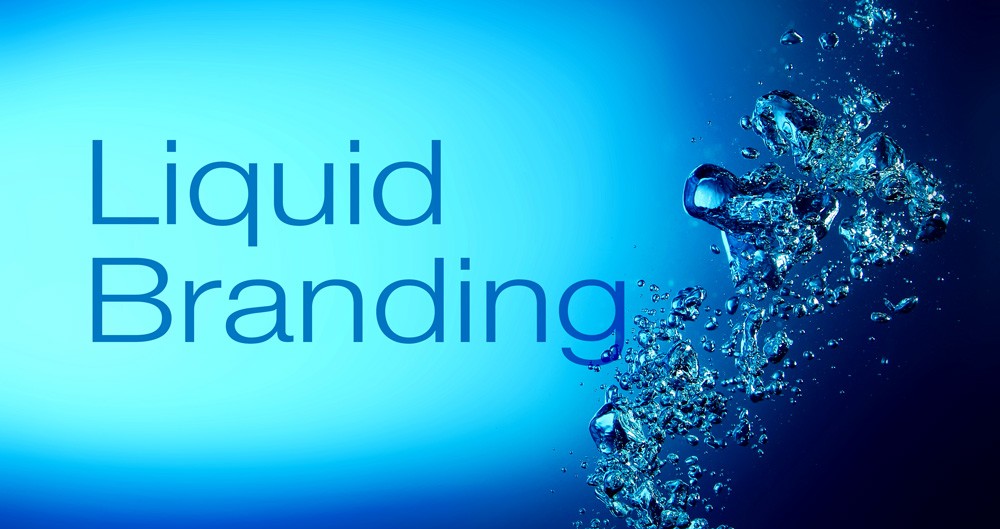 The expansion of media choices is accelerating the need for branding to be more flexible. The old ways of crafting a brand identity and rigidly controlling it are ending. Similarly, the quickening pace of consumer fatigue requires brands to be constantly interesting. This leads to brands needing to continually “reinvent” themselves - which is the antithesis of classical branding.

The root inspiration for today’s branding is probably the Swiss Style that really dictated a rigid, clean use of logos in branding. Traditional branding guides strongly controlled how logos could be used; their size, the space around them, their colors, etc. Gridded layouts and template guides allowed consistent application of a brand by non-designers across business units - making this approach appealing within the corporate structure. This branding process remains popular among most brands today - though I suspect external forces are eroding it.

The iconic branding of the past is morphing into a more expressive form. Rather than relying on a single icon (the logotype) to capture a brand’s identity, the iconography is going deeper. The overall style and elemental treatments are being used to carry the brand. An icon may still exist, but it’s no longer sacrosanct. It’s a holistic design approach that’s being used to communicate a company’s core values - allowing for much more fluidity in the overall brand.

The medium is the guide

Not too long ago, there was broadcast TV, radio, newspapers and magazines, and outdoor advertising (billboards, etc.). But today, a brand’s messaging must contend with fragmented channels for all the major forms of advertising and grapple with all the permutations that the internet offers. That is, social media, streaming video, web pages, and apps too. And most communication must adapt to a wide variety of viewing mediums and dimensions - from watches, smart phones, tablets, computers, and giant flat panel TVs.

Consumers are fickle and easily fatigued.

Not to mention, the recipients of a brand’s message are now – in large part – in control of its consumption. That is, consumers have so much choice and are inundated with so many brands, they can embrace and tire of a brand in a very short time. So brands must keep reinventing themselves to attract attention. Gone are the days of long-term brand loyalty.

A by-product of consumerism, strengthened by the yearly turnover in electronics, is an expectation of regular evolution and the compulsion to seek out the newest widget. Consumers have transferred this expectation to the brands themselves. If you’re not evolving you’re dying – and subsequently boring to them. Fickleness? Perhaps, but it’s the world we live in.

So how does this translate to branding?

Old-world branding decrees a rigid application of visual identities. The logo, the colors, the treatment are all systematized. The mantra: The brand must remain consistent or else. But in reality, this is the corporation trying to retain control of its brand in a much more fluid world. Unfortunately, the customer doesn’t always buy into this – or worse, doesn’t even find their brand appealing. After all, today's consumers interact with brands on their own terms… so a static, rigid brand can quickly become boring or obsolete.

I’ll admit, I’m a late convert to this concept. Having evolved as a designer immersed in corporate culture, I often leaned heavily on the "rigid is good" idea. But this concept puts too much emphasis on the logo and its associated elements. It ignores the intangible core facets of a brand. And it curtails exploration and limits the expression of the brand over the long term. Until ultimately, when interest in a brand wanes, the CEO decides to reinvent it thinking a new logo will kickstart things.

No, I’m not advocating anarchy

Branding has always been about communicating the core values of a company and connecting with its customers in an identifiable way. The logo and visual identity was the simplest path to this goal. But somewhere along the line it transitioned from a good idea and method to a zealotry about identity standards. But that’s started to change, and this change is accelerating.

The earliest example of this to me is probably the birth of MTV. It eschewed the traditional constraints of branding, and the logo and associated visuals elements were modified without worry - and it worked. It was cool. It was rock-n-roll. And it continues today.

Flash forward to an early pioneer of the digital age and you’ll see AOL was once a rigid logotype themselves. They covered the planet with their logo on CDs and everything else. But, after a long decline, in an attempt to revitalize the company they rebranded. And the new identity embraced versatility. The logo was playful and fresh and could be morphed and adapted as necessary. And while the new identity failed to right the ship, it was another example of liquid branding seeping into mainstream corporate culture.

USAToday also recently embraced the concept with their new identity. The old rigid application of their masthead now accepts more variety in its treatment. The circle element of the logo is meant to be flexible and modifiable. Do they still have one foot in the old world? Yes - but they’re moving in the right direction. 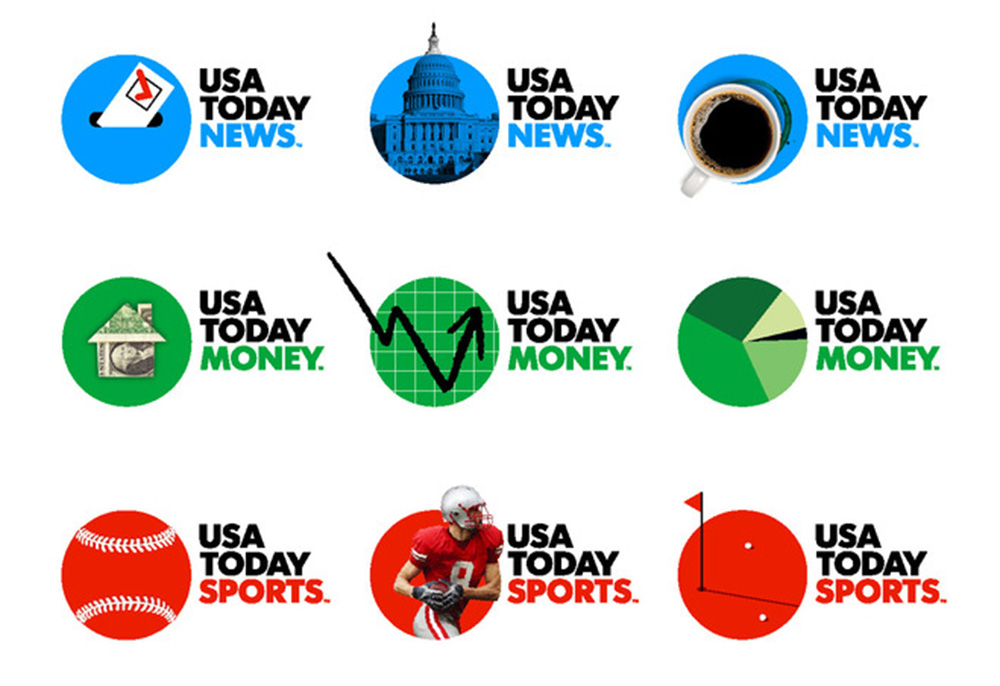 GEICO is another company that seems to allow flexibility in their brand. They’re the first advertiser I can recall that has aired different commercial approaches simultaneously. They aren’t constrained by a single advertising concept – which is relatively unique today. Cavemen, geckos, camels, and many more approaches have all aired in the same rotation. I’d say that’s a rather liquid approach to branding.

Even the iconic Apple has,  perhaps unknowingly, started to embrace liquid branding – and they’re a titan of brand rigidity. But their logo now adapts more easily to various treatments and styles. It’s morphed from the iconic multi-colored logo into an embossed metallic to today’s more emblematic symbol that feels equally at home softly glowing on the back of my laptop or emblazoned on paint splatters. It’s been colorized, manipulated, and treated with much more freedom - but it still conveys the brand.

So what is liquid branding in essence?

The concept is still evolving, but to me, liquid branding is the freedom for a brand’s visual identity to be more flexible in its usage and application. It doesn’t mean anything goes, but it does allow for far more freedom than was possible before. It means the colors, size, backgrounds, and elements that create the brand can all be malleable.

A liquid brand can adapt and be fun and seemingly appear “new” to consumers without having to redesign the brand every few years. It means companies will have to work harder to identify what they are at their core and how they want their customers to perceive them – they’ll have to actually figure out their brand essence.

The essential challenge this presents to companies is that in order to do liquid branding you have to be able to do it right. Which means you likely have to employ a designer and a marketer that work together to create the liquid “elements” that still maintain the essence of the overall brand. It means the brand does not have to fit into carefully manufactured grids and templates, and that it does not always have to be uniform. It can be flexible and liquid provided it still remains true to its core identity.

Because a liquid brand will be by definition more expressive and flexible, broad adoption of liquid branding will probably be slow for many corporations resistant to change. However, after successive brand “redesigns” and attempts to revive lagging brands, eventually perhaps the “last” CEO will embrace a liquid brand approach.

I believe, similar to responsive web design, brands will over time become more accommodating to the medium they’re utilizing and adaptive to the audience they’re communicating with. Brands will accept they can not and should not try to control every aspect of their brand. Instead they’ll embrace a new flexibility and concentrate instead on communicating their core values. There will be less emphasis on maintaining corporate branding and more effort put into connecting genuinely with consumers. The purpose: to keep them engaged, to deal with them on their terms, and to keep a brand fresh, alive, and evolving.

A brand should flow and become the shape consumers desire instead of trying to drown them with logos and messaging hoping to control what they think. It’s time to accept that rigid branding has probably reached the end of its reign. It’s time for branding to be like water.


There are 2 comments for this entry. Leave a comment below »

Excellent items from you, man. I've take into account your stuff prior
to and you're simply extremely excellent. I really like what you've received right here,
really like what you're stating and the way by which you assert
it. You are making it entertaining and you still care for to
keep it wise. I cant wait to read much more from
you. This is actually a great website.

I'm all for "liquid branding" - but it's a bit of a slippery slope. Companies still need to develop their core identity and work within that idea. Otherwise, it turns into an "anything goes" situation, where there is no cohesive thought or identity (would you call that "gaseous branding?")

Should Direct Mail be a part of your marketing strategy? »