Living In A Zombie Infested World

Today, we live in a world where we all sort of cultivate in the same direction and where fads take over. There have been a lot of things we simply thought we could not live without; everything from pet rocks, afros and platform shoes, to smart phones, iPods and our DVR. But today there is one growing trend, or should I say fascination, which strikes me as odd - and that is zombies.

Sure, they’ve always been around in film, making a debut in 1968’s Night of the Living Dead, but recently I see them popping up everywhere (not literally - thank goodness). On t-shirts, television shows, countless movies, music videos, in architecture (refer to Casey’s blog post, Zombie Proof House), in “zombie-themed” community events and now sometimes in my dreams (or nightmares). I am now convinced that there are people out there who wish we could co-exist with them. Unless some sort of scientific testing causes a contagious disease that causes us to want to eat other people like the movies express, I doubt it’s going to happen. Here are some examples to prove that we are zombie-maniacs:

Night of the Living Dead, The Hills Have Eyes, Colin, 28 Days Later, Dawn of the Dead, Zombieland and more.

Resident Evil, Dead Rising, The House of the Dead, Left 4 Dead, and more.

Zombie Walk - these are organized public events where people march in zombie costumes through town or city streets. I was able to partake in Asbury Park’s Zombie Walk. Post-walk, anyone who is dressed as a zombie is able to receive free food and drinks at local restaurants, bars and art galleries. These walks often raise awareness for community service events by sponsoring food and blood drives. 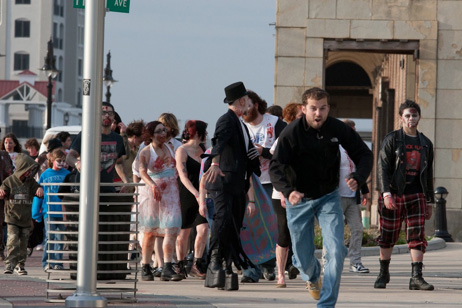 Zombie-inspired 5K Runs - Run For Your Lives is an apocalyptic 5K obstacle course race. This is not your standard 5K, for you will be running from blood-hungry zombies. The next race takes place in Baltimore on 10/22/11.

« Graphic icons of everything at The Noun Project