Facebook is evolving and so are its corporate users. Proctor & Gamble’s Pampers recently added e-commerce to their Facebook page via Amazon’s new app. Is this a good thing? Or is it the beginning of the end? 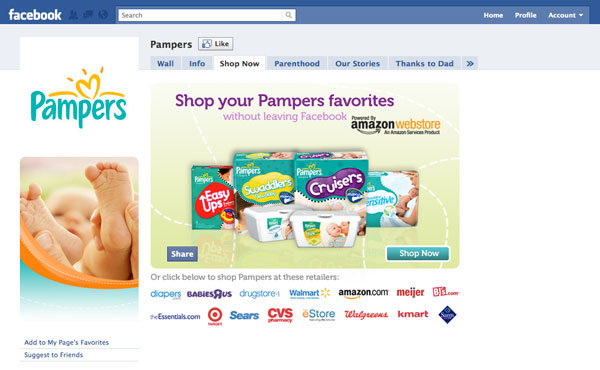 One of the first companies I’ve seen that’s directly trying to sell on it’s Facebook page is Pampers. This seems odd to me. I know it shouldn’t - it’s the natural evolution and commercialization of Facebook as a platform. But the social aspect seems tainted now.

Granted, Amazon’s app that allows e-commerce via Facebook is very interesting technology. But it still seems to erode the communal aspect of Facebook. Perhaps I’m simply projecting my own apprehensions. But as Facebook transforms itself, privacy concerns aside, it seems the influx of corporations has begun to shift what Facebook is. Good for Facebook, they start to make money, but I can’t help but consider that Facebook grew so rapidly because it was a refuge from the deluge of ads and selling found else where online. It was social. It was a community. 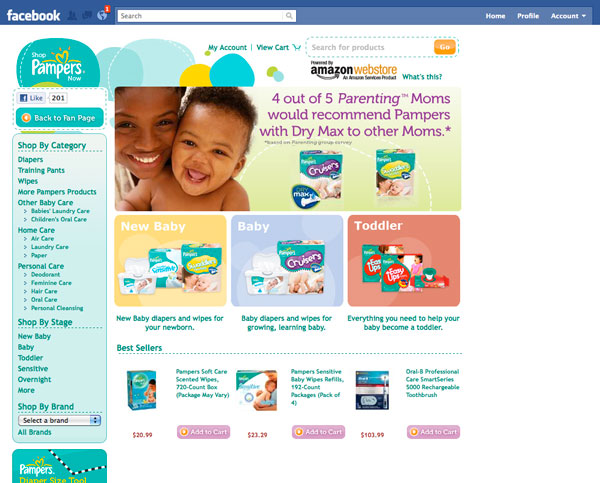 Progress and change are unavoidable

It’ll be interesting to watch how P&G’s Pampers utilizes it’s Facebook shopping tab. And I’ll watch to see how quickly other companies adopt their direct selling on Facebook. Will it prove to be popular and successful?

I suppose I’m among the target audience. I use Facebook and my wife and I have a new baby. But I don’t think I would have ever gone to Pampers Facebook page. We need diapers…but I don’t “Like” diapers. If I become a friend do I get a discount? What if I recommend or Like
Pampers….do I receive a reward? Would I even think to shop on Facebook
for diapers? Admittedly, I only stumbled upon this shopping option
after reading an article on Marketing Vox. But now that I’ve found Pampers on Facebook… guess I should Fan them? But I’m left wondering, what if I post a poopy comment on their wall….will it be sanitized?

« Small business marketing - you might feel little, but you can do it big