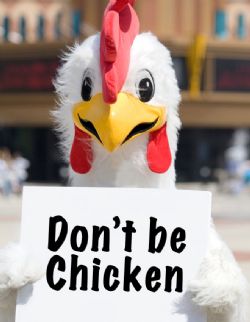 I’ve previously written about the importance of standing out from the crowd in order to break through the thousands of advertising and marketing impressions people are bombarded with on a daily basis. And it’s still true. In fact, it’s only getting worse. Since we now have social media and the mobile internet in our pockets - consumers are always connected. It’s almost impossible to avoid the din of marketing today.  So if you want to sell someone somethingÖfirst you have to get their attention.

People are busy, get noticed or die

In our new world order people buy and “share” things they find funny or interesting - and they forget all the rest. Hey, we’re all busy, so if you don’t grab my attention I’m moving on. So if your goal is to build a brand or to sell something your first priority is to get noticed.

Unlike most global behemoths most small businesses don’t have huge marketing budgets. So you can’t build a huge marketing machine and shoot money out of your butt until you hit some customers. So instead, you have to think better, you need to be more creative. And sometimesÖyou have to be willing to offend.

Think about the commercials you’ve seen recentlyÖthe ones you can remember are most likely the ones you found funny, annoying, or that people talked about. You noticed themÖ..and hopefully, you recalled the product they’re pitching too - but that’s another story. The same holds for our connected social world. People share what they find funny and interesting or alarming. Get noticed. People watch and/or learn. People buy and/or share.

Be bold or go home

So why is 90% percent of marketing dull, boring, and forgettable? People are averse to taking risks. They avoid doing what is necessary to get noticed; to be remembered. Instead they peddle the same predictable rhetoric that their competitors say too. They’ll boast of better customer service? Or lower prices? Or better value? But really, does the business down the street say anything different?

Is it any wonder that a businesses doing the same things as everyone else is getting lost among everyone? Nope. Hey, don’t get me wrongÖyou can reach a level of comfort and success by doing what everyone else doesÖ.but in the long run you’ll spend a lot more and you’ll have less to show for your investment. And worse, you’re replaceable. After all you’re one of a dozen that promises the same stuff. And today, customer loyalty is a fickle thing.

But if you want to get noticed and gain business quickly and you want to maximize your business returnÖthen go bold. Do something that’s completely different or out-of-whack with your industry. HeyÖI’m now a customer of the Dollarshaveclub.com because they did a silly, funny video about their “f**king great razors”. It went viral and I saw it and I bought. They could’ve played it safe and spent their cash on Google Adwords advertising against the big razor guys. They might have eked out a livingÖbut they would have spent a lot more and it would have taken longer. And they certainly wouldn’t have me as a customer.

You may offend some, but they weren’t going to buy from you any way

Let’s face itÖ.that video isn’t for everyone. To some it won’t be funny. To others it simply won’t be compelling. And some might be offended. But you know whatÖ.those folks probably wouldn’t buy from you any way. It’s just a fact of life, you can’t please everyoneÖso don’t even try. Do something bold and let the chips fall where they may. The people you do connect with will be your customers.

Go do something interesting

It’s a challenge to be daring - it’s risky. Lots of businesses simply won’t venture too far off the beaten track. Or they believe their product is boring or stodgy. But it’s not the case. Anything can be spun into something more interesting. Blendtec makes blenders - that’s pretty boring stuff. But on Willitblend.com they demonstrate the power and durability of their blenders by blending stuff that should not be blended. It’s genius!

Consumers today lead frenetic lives with tons of distractions. Don’t be a me too small business. Instead do something bold and take a risk. Sure it may fail. Dust yourself off and try again. Things don’t always succeed on the first try. It took Edison over 10,000 failures to invent the light bulb. Your first attempt may not go viral. Your 9999th attempt may not. But it only takes the one success. The important thing is you’re trying to do something different.

« Dick Clark leaves behind a legacy, but also a Flintstone Caveman house