Ok so this is totally not practical yet today but as a person who has been moved personally by the recent movement into renewable energies I stumbled upon this and couldn’t help but want to share and wonder. What in the world has taken us so long to get on the bus? I am absolutely amazed that the concern for the use of fossil fuels dates back to the 1860s!!! And in over 100 years we have only just started to really take solar serious.

In the 1860s a french mathematician named August Mouchet grew concerned with our use of coal for steam engines. He began getting patents for the first solar power devices. Abel Pifre a french engineer worked with Mouchet as an assistant/consultant. After his work with Mouchet, Pifre went on to build several engines of his own improving on Mouchet’s achievements. Where Mouchet’s machines would only utilize only 50 percent of the suns heat, Pifre’s improved it to 80 percent.

In what I can only conject was an attempt to show the practicality of solar power Pifre invented a solar power press which he demonstrated to the Union Francaise de la Jeunesse at the Jardin des Tuileries Paris on the 6th of August 1882. This press operated from 1:00pm to 5:30 in what was reported as semi-overcast conditions to produce 500 copies per hour of a pamphlet specifically produced for the event. 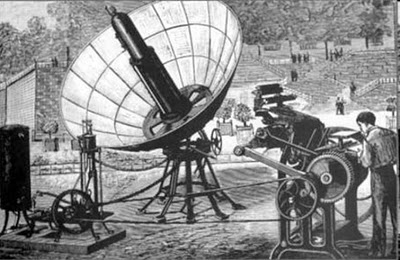 No actual photographs of the press exist however artist rendering of it are shown here. Remember that this was 1882 while photography was around it was still pretty new. I say this because think about photography and how far it has come itself only because we have put time in effort into improving it. What impresses me most about this invention is that the dish itself created to capture the sun was only 11.5 feet in diameter and it looks similar to some satellite dishes we used in the 80’s, the 1980s. Maybe that is bulky and impractical but I have to believe if the cause of these early inventors was taken up we’d be much further along then we are today.

« Social Media is Just One Component of a Marketing Plan